ADDRESS BY THE PRESIDENT OF INDIA, SHRI RAM NATH KOVIND AT THE VALEDICTORY FUNCTION OF ‘AZADI KA AMRIT MAHOTSAV’ IN THE NORTH-EASTERN STATES 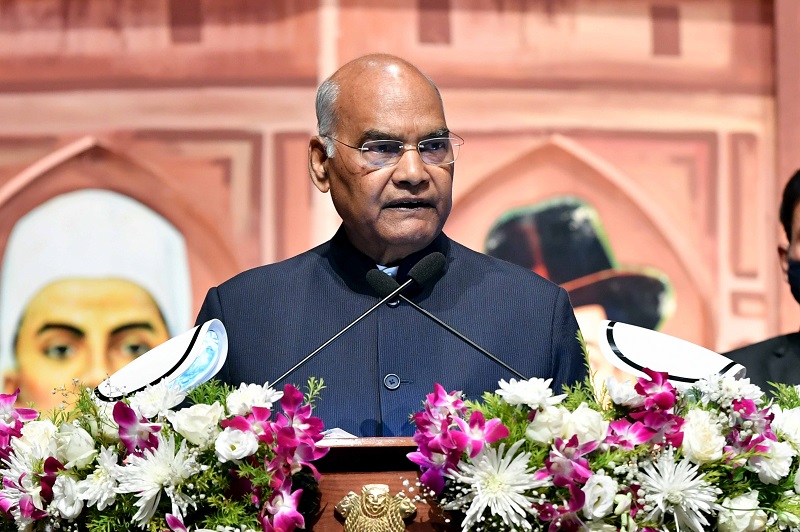 It is my pleasure to be here among you for the valedictory function of the ‘Azadi ka Amrit Mahotsav’ for the North-Eastern states. The celebrations have been on for a week, in the state capitals and also in districts. Political leaders, government employees, students, farmers, civil society, sportspersons and others have made the event a great success. I would like to heartily congratulate the Union Minister for DoNER, the Governors and the Chief Ministers of all the North-Eastern states and especially the people of the region for their enthusiastic participation. I am impressed by their spirit of "Hum Kisi Se Kam Nahi”!

It is my impression that in the recent years, we have been connecting with history, especially of the national movement, more than ever before in the recent decades. We held year-long celebrations of the 150th birth anniversary of Mahatma Gandhi in 2019. The young generation in particular had an opportunity to rediscover the values that the Father of the Nation advocated. Then, we began celebrations of the 75th anniversary of our Independence. I am pleasantly surprised by people’s widespread participation in various events organised under ‘Azadi ka Amrit Mahotsav’. It shows their zeal to nurture the foundational principles of our Republic.

When the nation celebrates the freedom movement, citizens recall the valour and patriotism of not only its great leaders but also lesser-known or forgotten participants without whose sacrifice it would not have been a mass movement. We are rightly proud of the fact that such participation was witnessed in every nook and corner of the country. Every Indian yearned to see Mother India freed from the shackles of foreign rule. The North-East region was second to none when it came to joining the struggle for freedom.

In those days, when tools of communication were limited, the North-East region was not so well connected with most other parts of the country, and yet it was not cut off from the patriotic undercurrents elsewhere. Assam in particular played a significant role in the freedom movement right from the early stage. People in this state as well as in the neighbouring states had responded enthusiastically to Gandhiji’s call for Non-Cooperation, Civil Disobedience and finally the Quit India movement. Netaji Subhas Chandra Bose’s call for a militant struggle to win Independence had an exceptional resonance in this part of the country. On April 14, 1944, the Azad Hind Fauj had captured Moirang in Manipur from the British Army and hoisted the national flag as a mark of victory for the first time in Indian soil. I visited the INA war memorial in Moirang on November 22, 2017 to pay respect to those fighters who laid down their lives to secure freedom for us.

When we celebrate the 75 years of Independence, when we recall the magnificent episodes of our freedom movement, when we think of the life and work of our great leaders, we do so in order to gauge where we stand today compared to their dreams. We do so in order to learn more about their vision and be inspired from their struggles to build a better tomorrow.

When our nation won Independence, the North-Eastern region was vastly different from what it is today. The state of Arunachal Pradesh, for example, used to be a centrally administered territory known as North East Frontier Agency (NEFA). Nagaland gained statehood in 1963. Manipur and Tripura used to be princely states which acceded into the Indian Union in October 1949, became Union Territories in 1956 and full-fledged States in 1972, together with Meghalaya. Sikkim had been a protectorate of India till it joined the Indian Union in 1975. Mizoram became a Union Territory in 1972 and then a state in 1987.

Initially, the North-Eastern region had suffered hugely because of Partition of India, as it found itself suddenly cut off from major centres of communications, education and trade and commerce such as Dhaka and Kolkata. The only corridor connecting the North-East and the rest of the country was a narrow strip of land in the north of West Bengal, making it challenging to support developmental initiatives in the region. Yet, we have diligently worked to overcome the challenges of geography. During the last 75 years, the North-East has made significant progress on a variety of parameters.

Road, rail, airways and waterways connectivity has grown exponentially during the past few years. Railheads are reaching places where they are most required. All state capitals will eventually be connected by rail. Inter-state and intra-state air connectivity is now a reality with many airports operational and smaller aircraft connecting capitals. Electricity supply has also reached the villages that were left out so far. I was literally bowled over by the beautiful landscapes, serene surroundings and industrious people of each state of the North-East which I visited during my campaign for the presidential election in 2017.

The North-Eastern region is the natural gateway for India to South-East Asia and beyond. With over 5,300 kilometres of international borders with several neighbouring countries, it has significant strategic value. With the launch of the Look East Policy, or LEP, the security-centric approach towards neighbours in the east gave way to a prioritising of economic issues for benefiting from the common potential for economic growth across the region. In 2014, the LEP was upgraded to the Act East Policy, that is, AEP, which brought about a paradigm shift and marked a significant change in the potential role of the North-East region. Emphasis was placed on enhanced connectivity, security, stability and development. In an innovative move, the government has also assigned Union Ministers as in-charge of each of the North-Eastern states to oversee the projects and give a pace to development and growth of the region.

You are aware that about 28 percent of the total population in the region, especially in the hilly areas, is tribal. If Assam is not counted, 60 percent of total population of the remaining seven states constitute tribal population. The region is home to at least 133 of the total 705 Scheduled Tribe groups identified in India. Many distinguished luminaries have emerged from among these tribal and other ethnic communities. I am happy to learn that efforts are on to preserve the cultural richness and linguistic uniqueness of the smaller tribal communities.

The North-Eastern region has immense inherent strengths. What it offers in terms of tourism, horticulture, handloom and sports is often unique. The whole country feels proud when sportspersons from this region step up to the podium to earn medals for India in the Olympics and other international competitions.

Efforts are needed now to place the North-Eastern states on par with the industrially advanced states so that more jobs are created here. Recognising this need, the Government is working with the states to improve their Ease of Doing Business parameters and to facilitate the flow of private investments into the North-East. These efforts are starting to bear fruit. I am told that here in this city, a state-of-the-art manufacturing hub is being developed next to the international airport. Global leaders in electronics and IT manufacturing are expected to set up their facilities here.

When climate change has emerged as the greatest challenge before humankind, careful planning and efforts will be needed in the years to come to preserve the rich ecological heritage of the North-East. This region is part of the Himalaya and Indo-Burma bio-diversity hotspots – the two of 25 such hotspots in the world. Development choices for the region must, therefore, integrate relevant strategies for natural resource management, green industrial and infrastructure development as well as sustainable consumption patterns.

With ‘Azadi ka Amrit Mahotsav’, we are now moving into the ‘Amrit Kaal’, that is, the final quarter of the first century of Independence. Twenty-five years later, when we will celebrate the centenary of freedom, I am confident that the North-East will have gained further momentum on its journey to development. With greater physical and IT connectivity, improved health and education facilities, increased trade, and growing economy, the region will surely have emerged as an engine of growth for the entire country.

As per Vastu which is part of Indian culture, the North-East direction is always considered to be very auspicious and I firmly believe that North-Eastern states will bring about prosperity and success of our entire nation. The geography of North-Eastern states, one day, is going to make the way for creating new glorious history of our country.

My best wishes to all of you for this transformational journey.