ADDRESS BY THE PRESIDENT OF INDIA, SHRI RAM NATH KOVIND AT THE INDIAN COMMUNITY AND FRIENDS OF INDIA RECEPTION DURING HIS STATE VISIT TO KINGDOM OF THE NETHERLANDS 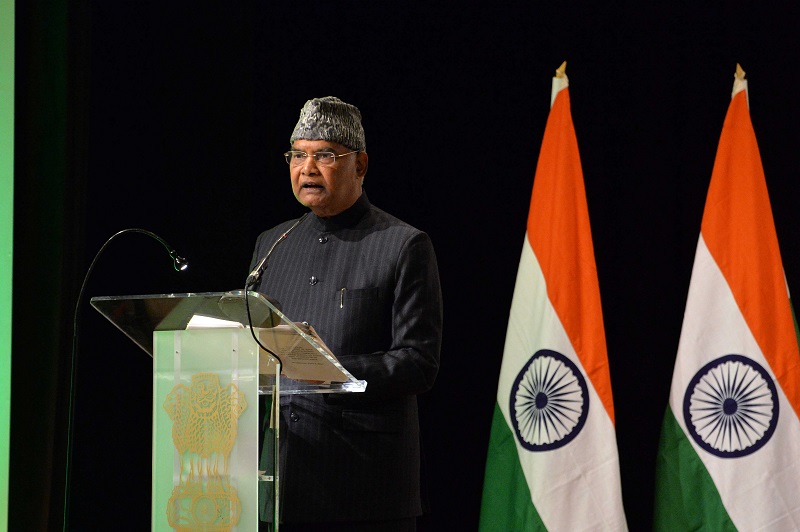 My State Visit to the Netherlands marks an important milestone as we celebrate the 75th anniversary of the establishment of the diplomatic relations between India and the Netherlands this year. At the outset, let me also thank the Government of the Netherlands for their generous hospitality. Yesterday, I met His Majesty King Willem Alexander and Her Majesty Queen Maxima and had good discussions with them on the way forward for our bilateral relations. King Willem was highly appreciative of the role that all of you have played in the Netherlands. He had kind words to say about your contribution to this great country and the decades-old relationship with India. Earlier today, I had excellent exchange with Prime Minister Mark Rutte and it was a pleasure hearing similar accolades from him as well. During our luncheon meeting with the Prime Minister, he had also invited a few young entrepreneurs coming from India and working in the Netherlands. I am happy to share with you whatever they spoke about their growth stories, they were amazing and wonderful. India is proud of them and proud of all of you. It fills my heart with both pride and gratification.

One may take an Indian out of India but not India out of an Indian. I told those entrepreneurs that you live anywhere in the world but don't forget your roots in India. While in last hundreds of years, many Indians travelled abroad, India has always kept beating in their hearts. And proudly, they kept alive Indian civilizational values in whichever part of the world they settled in. I am not surprised that wherever the people of Indian origin settled, they adapted to that place as their home and fully integrated with it.

For the members of the Hindustani-Surinami community, India remains the beloved cultural and spiritual home. Although your ancestors undertook their journey from India nearly two centuries ago, it is remarkable that you have kept alive the cultural heritage of India and nurtured it with your own unique traditions. I am happy to learn that you celebrate your festivals with as much enthusiasm and pride as any Indian. On Baisakhi, Holi, Shivratri, Diwali, Eid and Christmas, you not only greet each other but also your Dutch friends and neighbours.

The Netherlands is renowned for the Tulips. But I am told they are not native to the Netherlands. They were brought from another land, they flourished here and are now a distinct aspect of this country, just as you are great representatives of this wonderful country, my Indian brothers and sisters. It is also apt that the joint logo for the celebrations of the 75th anniversary of establishment of diplomatic relationship has a tulip and a lotus as our primary symbols of friendship.

You may have heard that on the 4th April, when I landed in the Netherlands, there was a programme to visit Tulip Garden where a new verity of Tulip developed by local authorities named 'Maitri' was inaugurated by my wife.

Our bilateral relations are underpinned by shared values of democracy, rule of law, equality and respect for human rights. We are also witnessing a convergence on global challenges such as climate change, sustainable development and terrorism.

Over the past seven and a half decades, bilateral trade and investments between our two countries have grown remarkably. The Netherlands is now the third largest investor in India. Likewise, India is also emerging as one of the top investors in Netherlands. The Netherlands is a pioneer in water management and scientific know-how. Last year, Prime Minister Modi and Prime Minister Rutte jointly launched the Indo-Dutch Strategic Partnership on Water. Both sides are closely working together to implement several joint projects in this sector. Agriculture, health, port and shipping, science and technology, higher education and urban development have been identified as other priority areas of cooperation.

Indian professionals in the Netherlands have done extremely well. As entrepreneurs, doctors, bankers and technology experts, you are adding immense value to the Dutch society and economy as well as global community at large. We are proud of your achievements and your success. The Netherlands is also home to a substantially large number of Indian students who are excelling on campus in studies, research, and innovation. I am pleased to note that this community is continuously expanding, which shows the level of confidence you have placed in the hospitality of this beautiful country.

In all my interactions, I have sensed a strong interest in the Dutch leadership to strengthen and diversify our partnership in existing and new areas of cooperation. We are both committed to further enhancing our ties through joint initiatives.

The Indian diaspora extended support by way of material and monetary donations during the pandemic last year. We appreciate this thoughtful gesture. All the material and monetary donation were put to good use in various parts of the country. It is in times like these that we are reminded that Indian Diaspora living abroad is our extended family, lending us additional strength. With my sincere appreciation, I encourage you to continue such efforts in future also.

We also look forward to your immense contributions in Tourism, Technology and Trade – the three key drivers of any economy like India. And you can connect with us on these issues.

India is deeply committed to strengthen its bond with the diaspora and to attend to your needs. In the past few years, our engagement with and outreach to the Indian diaspora has grown manifold. We have taken several initiatives under the maxim of 4Cs – Care, Connect, Celebrate and Contribute. The Overseas Citizen of India cards have been issued to give status and privileges in many areas. The travel to India has been facilitated through issuance of long-term visa and E-visa. To increase the participation of the diaspora youth and familiarize them with Indian youth and their Indian roots, we started the Know India Programme and Scholarship Programme for Diaspora Children for the children of Person of Indian Origin to join Indian universities for higher education. We would like you to avail these initiatives and actively participate in them.

The safety, security, welfare and well-being of Indian citizens in all parts of the world is a priority for India. In every corner of the world, over the last two years, the Government has made special efforts to enable our citizens to return home during the worst phase of the COVID-19 pandemic by undertaking ‘Vande Bharat’ mission. Recently, Operation Ganga brought back more than 23,000 Indian citizens, largely students, who were stranded in the conflict zone in Ukraine. As the Prime Minister said, humanity was at the core of the Operation Ganga, not the colour of passport.

Many of you visit India regularly. If you travel to India after a gap of a few years, you will find a new India. Our growth and development mirror a new confidence in the country. It has been the effort of the government that every section of the society is covered in our developmental efforts and we take along everyone keeping in line with our philosophy of ‘Sab ka saath, Sab ka vikas, Sab ka vishwas, Sab ka prayas’.

The guiding principle of the Government is: ‘Reform to transform’ and far-reaching policy reforms have been brought in every sector of Indian economy based on thismantra. The objective is to make the entire system transparent and accountable while eradicating corruption. You may have noticed that as India is changing, the way the world sees us is changing as well. Many of you would have experienced this personally.

India today is full of opportunities for business, for social enterprises and for cultural connections. I invite each one of you to join us in our transformational journey. You can contribute with your ideas, your business models and your investment profiles. We count on the Netherlands as a key partner in our national flagship programmes – Make in India, Skill India, Clean India and Digital India. We are keen to leverage Dutch technology, know-how and investment for growth and development in India. You all can play an important part in achieving this objective.

I would like to conclude by saying that the Indian community abroad is our strength and pride. When I read about your achievements, when you occupy a big office or file a nomination, taking small steps towards formulating the policies of your respective countries, you are playing a role in changing the geo-politics of the region. Please remember that the land of your ancestors is very proud of you.

In my interactions with the Dutch leadership, I was happy to hear about the high regard they have for the Indian community’s diligence and valuable contributions in various fields and how well you have assimilated with the local culture. I wish you all success in your endeavours, good health and happiness.