ADDRESS BY THE PRESIDENT OF INDIA,SHRI RAM NATH KOVIND ON THE OCCASION OF INAUGURATION OF THE NATIONAL JUDICIAL CONFERENCE ON MEDIATION AND INFORMATION TECHNOLOGY ORGANIZED BY THE HIGH COURT OF GUJARAT 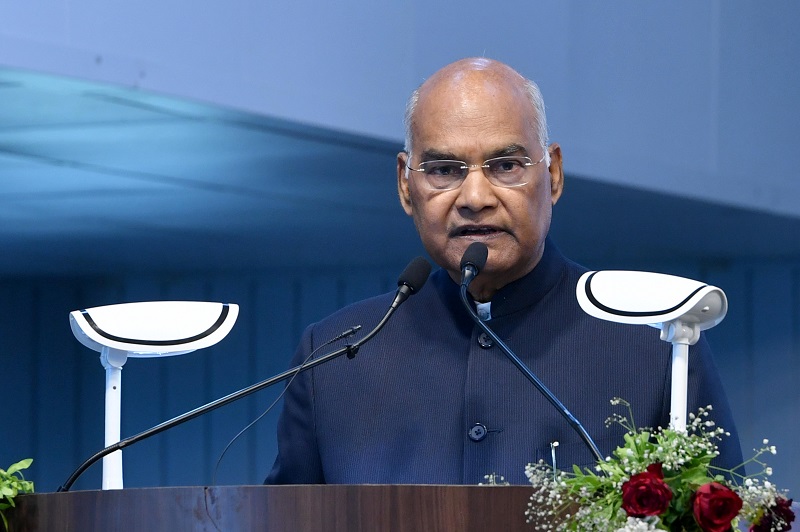 It is my pleasure to be among you here today, when you are going to deliberate on two highly significant topics that are crucial in the functioning of the Judiciary. Equally, I am glad that this deliberation is going to take place at a site that commemorates the life and work of Sardar Vallabhbhai Patel, one of the greatest sons of India. Whenever I have visited the Statue of Unity, I feel the vibes of Sardar Patel’s indomitable spirit of service to the nation.

The objective of this All-India Judicial Conference is to facilitate a series of brainstorming sessions in which the Chief Justices and the concerned committee Judges of all the High Courts are participating. In other words, we have the best and the highest of the decision-making authorities from the justice delivery system of the country. The topics are Alternative Dispute Resolution, that is, ‘ADR’, mechanism and the role of Information and Communication Technology, or ‘ICT’, in the Judiciary.

As you know, during my earlier career I had been associated with legal profession before turning to social service full-time. I used to practise at the Delhi High Court and later at the Supreme Court, and during those years, one of the issues that occupied my mind was ‘access to justice’. The word ‘justice’ encompasses a lot and it has rightly been stressed in the Preamble of our Constitution. But do all people have equal access to justice? I wondered how access to justice can be improved for all. It has remained one of the issues close to my heart. I, therefore, find the topics for the conference very carefully chosen. Both the ADR mechanism and the ICT in the Judiciary are important for many reasons; but to my mind, they are important as they will help make the system more efficient and thus better able to dispense justice.

For effective dispute resolution that is also litigant friendly, the ADR system has been introduced in the form of legislation by insertion of Section 89 in Code of Civil Procedure. ADR has many modes, including arbitration, mediation, conciliation and negotiation, Lok Adalat and judicial settlement. Mediation, in particular, is quite important. During the last two decades, all stakeholders have recognised mediation as an effective tool for dispute resolution and encouraged it. As several legal luminaries have observed, most of the cases pending in the courts between individuals in respect to civil rights are such that they do not need adjudication. The parties in such cases can redress their dispute amicably through a structured intervention of mediators.

Mediation aims to settle the dispute not by any command or authority. Rather, it encourages the parties to arrive at the settlement by systematic mediation sittings by the mediator. The legislation also provides an incentive: if any pending litigation is settled by mediation, the entire court fees deposited by the litigant party are refunded. Thus, truly speaking, in mediation everyone is a winner.

Having said that, one has to admit that the concept is yet to find widespread acceptance across the country. Not enough trained mediators are available in some places. Infrastructural facilities at many mediation centres badly need upgradation. These bottlenecks have to be addressed at the earliest to help a wider population benefit from this effective tool.

Moreover, all stakeholders should display a positive attitude towards mediation, if we want to achieve desired results. In this regard, training can make a lot of difference. It can be provided at different levels, from introductory courses at the induction stage to refresher courses for mid-career professionals. The Mediator and Conciliation Project Committee of the Supreme Court has been doing a great job by organising training programmes in the states.

If there had been any misconception among lawyers that mediation could be a threat to their profession, the last couple of decades must have convinced them that it is not. If anything, it is an additional feature in their skills and expertise. Successful mediation not only provides a high amount of recognition to the lawyer, but it also gives great job satisfaction.

They can also take inspiration from the Father of the Nation. In South Africa, Mahatma Gandhi had a highly successful career, but he preferred the way of mediation above all. The first time he succeeded in bringing two parties to resolve their dispute, he felt (in his words) "boundless joy”. He wrote, [and I quote] "I had learnt the true practice of law.I had learnt to find out the better side of human nature and to enter men’s hearts. I realized that the true function of a lawyer was to unite parties riven asunder. The lesson was so indelibly burnt into me that a large part of my time during the twenty years of my practice as a lawyer was occupied in bringing about private compromises of hundreds of cases. I lost nothing thereby - not even money, certainly not my soul.” [Unquote]

We all have passed through a very difficult crisis. The pandemic is not yet over, but hopefully we are beginning to have a glimpse of its end. Amid unprecedented human misery during the last two years or so, if there was a saving grace it was from Information and Communication Technology. ICT proved most helpful in maintaining essential activities and in keeping the wheels of the economy moving. Like remote working, remote learning helped avoid a break in education. In a way, the crisis has proved to be an opportunity for the digital revolution. The momentum has increased for the adoption of ICT to make public service delivery more efficient. At the peak of the crisis, we too had continued various functions at the Rashtrapati Bhavan with the support of technology. Dispensation of justice, too, was made possible with virtual hearings when physical gathering had to be avoided.

Even before the pandemic, the justice delivery system had benefitted from the ICT to improve the quantity and quality of the services delivered to litigants and all stakeholders. Under the leadership of the e-Committee formed in the Supreme Court and with the active assistance and resource support of the Department of Justice of the Government of India, two phases of the e-Courts project have been accomplished as per the policy and action plan approved and adopted for the respective phases. As a result, there is smooth access to the statistics as published on the portal of the e-Courts. Thanks to the National Judicial Data Grid, a citizen can easily learn about the pendency and arrears of cases with details of year-wise pending and the oldest pending cases before the respective courts.

In the similar manner, the computerisation of courts has delivered immense benefits for each of the stakeholders. Several courts have made notable innovative advancements in using ICT to improve access to justice and its delivery. A number of the High Courts have started live-streaming of court proceedings of their benches. I understand the High Court of Gujarat has been the pioneer in this.

As with other public institutions, the Judiciary too must have been facing several issues in shifting to the digital world. These are broadly known as change management, and they are part of the transformation. Those are the kind of issues the worthy members of the Judiciary will be discussing over these two days. I gather there is a full working session devoted to the subject of ‘Future of Technology in the Judiciary’. I would add that among many objectives of the switch to ICT, the topmost has to be the improvement of access to justice. What we are aiming at is not change for sake of change, but change for sake of a better world.

I am sure that this National Conference will deliberate upon not only the great potential of both mediation and ICT in courts, but also how best to respond to the challenges along the way. I congratulate the Chief Justice of the High Court of Gujarat and his colleagues for organising the National Conference. As you discuss the finer topics, I am sure, you will feel as if Sardar Patel is looking at you and inspiring you to always keep the nation, its citizens and their interests in mind. My best wishes to you for fruitful deliberations!