ADDRESS BY THE PRESIDENT OF INDIA, SHRI RAM NATH KOVIND ON THE OCCASION OF THE PLATINUM JUBILEE CELEBRATION OF RASHTRIYA MILITARY SCHOOL BENGALURU 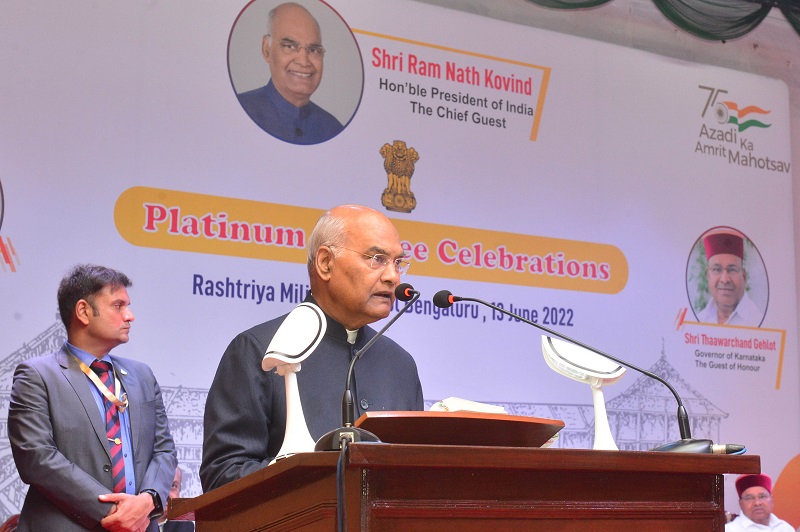 I am delighted to be here in this special function organised to celebrate the Platinum Jubilee Celebrations of Rashtriya Military School, Bengaluru. I congratulate all the cadets, teachers, alumni,and staff members on this special occasion. Since it was established in 1946, the school has come a long way and is acknowledged as one of the finest boarding schools in the country.

This region, comprising modern Karnataka, has shown the highest examples of spirituality, art, architecture, science, education, and bravery through centuries.

Indians will forever cherish the contribution of Field Marshal K.M. Cariappa, who was the son of this soil. As you all know, he was the first Indian Commander-in-Chief of our army and one of the two Generals honoured with the rank of Field Marshal, the highest rank attainable in the Indian army. It was my privilege to inaugurate General Thimayya Museum, dedicated to another great son of Karnataka, at Madikeri last year. Both these great generals from Karnataka will forever be remembered as two of our finest military commanders.

Karnataka has emerged as a leading centre of modern education and technology. I am happy to note that Karnataka got the top rank among all the states in the latest ‘India Innovation Index’. Bengaluru has emerged as a globally comparable centre of learning, technology and enterprise. I am told that in a recent report, Bengaluru figured among the top five venture-capital-funding-hubs across the world in 2021.

Under the guidance of the Governor - Shri Thaawarchand Gehlot and the leadership of the Chief Minister -Shri Basavaraj Bommai, Karnataka has been making remarkable strides. I congratulate the entire team of the state government for the praiseworthy achievements of Karnataka.

As we all know, Rashtriya Military Schools were conceived with the aim of providing quality education to the wards of Army personnel. But later, the schools were opened to civilians. I am happy to note that Rashtriya Military Schools are truly national in character. I am told that at present, cadets from 23 states are receiving education in this school. From Jammu & Kashmir to Kerala, the cadets here represent our "Unity in Diversity”. I am sure that this inter-mingling has helped the cadets to learn and appreciate the culture, language, and traditions of their fellow cadets.

Today, Rashtriya Military School Bengaluru can feel justifiably proud of its rich heritage. The alumni of this school have distinguished themselves as highly decorated military officers, eminent judges, political leaders, civil servants, entrepreneurs, sports-persons, performing artists and achievers in many other fields of excellence.

It must be a matter of pride for all of you that one of your distinguished alumni,Capt Gurbachan Singh Salaria was given the nation’s highest gallantry award, Param Vir Chakra, posthumously, for his courageous actions and making the supreme sacrifice during a UN operation in Congo. I have been delighted to confer Distinguished Service Decorations on some of the alumni of your school at Rashtrapati Bhavan. One of them, ViceChief of Naval Staff SN Ghormade, happens to be present here. I awarded him the Param Vishisht Seva Medal about a fortnight ago. I was pleasantly surprised to see Lt. General CP Cariappa, MGS, receiving me here on behalf of the school as its alumnus . Some of you may be aware of the fact that he was once my Military Secretary. He used to talk passionately about this school. I am happy to recall having conferred upon him the Ati Vishisht Seva Medal.I am confident that the impressive list of the school’s alumni will inspire you to follow their examples and serve the nation with distinction.

I am happy to know that from this academic year onwards, girl cadets are going to get admissions into Rashtriya Military Schools across the country. As you all know, starting this year, the gates of the National Defence Academy have also been opened for girls. Our daughters are breaking many glass-ceilings and setting new records in various fields, making the country proud. When I travel to different universities and institutes across the country, I witness many instances of girls outshining boys.

As the Supreme Commander, I am happy to see the rising number of women in the armed forces, including in combat roles. I am happy to note that, recently, Captain Abhilasha Barak became the first woman officer to join the Army Aviation Corps as a combat aviator. I am confident that the girl cadets, joining this prestigious school, will contribute in defending the nation and play their role in nation building.

Your school motto "Sheelam Param Bhushanam”, or "Character is the highest virtue” should always be the guiding light for all of you. I am confident that the school will continue to provide holistic education to you and future-cadets, and inculcate in you, military ethos and discipline. I am sure that your school will continue to produce leaders with high moral values who will take India forward as a strong and front-ranking nation. I wish you all, a very bright future.