ADDRESS BY THE PRESIDENT OF INDIA, SHRI RAM NATH KOVIND ON THE OCCASION OF INAUGURATION OF THE NATIONAL WOMEN LEGISLATORS' CONFERENCE 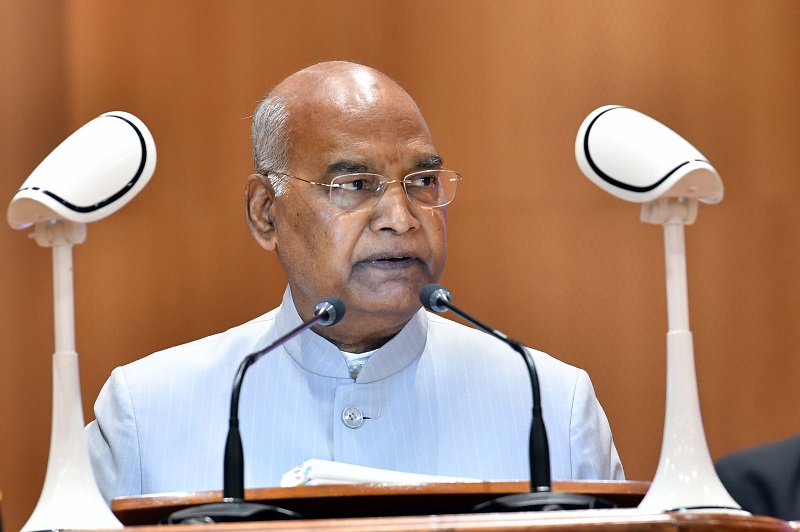 I am indeed both glad and proud to be here among you today. I am glad because I am facing a great gathering that shows the power and potential of India’s democracy. I am proud because I am addressing you, the elected women representatives of India, who have chosen to step out and make a difference in a way only you can.

It is only appropriate that the National Women Legislators’ Conference is being held when the nation is preparing to commemorate the 75th anniversary of our Independence. Under ‘Azadi ka Amrit Mahotsav’, we have been holding memorial events for more than a year now. People’s enthusiastic participation in various functions shows their zeal to connect with the past and rediscover for themselves the foundations of our Republic. In the saga of our freedom movement, women played a stellar part. That context adds significance to this conference.<

India’s efforts to be freed from the shackles of an exploitative colonial rule began long ago, and 1857 was one of its early manifestations. Even in the middle of the nineteenth century, while there were only men on the other side, the Indian side included many women. Rani Lakshmibai was the most notable among them, but there were many more like her fighting bravely against the unjust rule. That period was marked by countless uprisings across the country against foreign rule. They were of local nature, but they were also animated by nationalist aspirations. Equally, they all were marked by women’s whole hearted participation in them.

It was towards the end of the nineteenth century that the freedom struggle started taking a distinct and formal shape. Gandhiji’s return to the motherland in 1915 transformed it into a mass movement. A number of satyagraha campaigns led by him, from the Non-Cooperation Movement to Quit India, had widespread participation of women. Indeed, historians have noted that women from all sections of society came out of their limited domestic spaces and joined public agitations in large numbers thanks to Gandhiji’s unique leadership. I would like to add that those agitations were so successful eventually precisely because there was women’s participation in them.

Among the first women satyagrahis was Kasturba. Given the larger-than-life personality of her life partner, her own contribution to the nation tends to be ignored. She was not only the better half of the Father of the Nation, she was an inspiration to many women right from her days in South Africa.

Also, consider the Salt March to Dandi, the great event that changed the course of history. When Gandhiji was arrested, he chose to pass the mantle of leadership of this campaign to Sarojini Naidu. A great orator and poet, Naidu led by example, and gladly faced a jail sentence.

And how can we forget her associate, Kamaladevi Chattopadhyaya? She was among the first women to contest elections and she thus lit a torch that you have been carrying forward in today’s times.

When one starts giving examples of women’s participation in our national movement, so many inspiring names come to mind that one is able to mention only a few of them. Before this august assembly of women legislators, I would like to recall the heroic sacrifices of Madam Bhikaji Cama and of Captain Lakshmi Segal and her associates in the Indian National Army led by Netaji Subhas Chandra Bose.

When the glorious day of freedom came closer and the Constituent Assembly got together to draft a Constitution for the nation, we were indeed fortunate to have fifteen women members in it – and three of them were from Kerala. Notable among this group was Hansaben Jivraj Mehta, also a social reformer and educationist. Her contribution to the cause of women’s empowerment goes well beyond the boundaries of India. Hansaben was also India’s delegate to the UN Human Rights Commission in 1947-48, when the Universal Declaration of Human Rights was being drafted. It was due to her intervention that the opening line was changed from "all men are created equal” to "all human beings are created equal”. India had then just emerged out of the colonial era. Yet, it is a matter of great pride for us that it was an Indian woman who taught the world the first lesson in gender equality.

This sensitivity towards equality of all kinds could only have been achieved due to the freedom struggle. India accomplished a rare distinction of offering universal franchise to all its adult citizens, regardless of any distinctions, right at the inception. Women not only voted in elections, but even contested and 24 of them were elected to the first Lok Sabha in 1952. They included great freedom fighters like Sucheta Kripalani. Also, consider the pace and momentum of women’s empowerment: Barely a decade later, in 1963, she became the chief minister of Uttar Pradesh, then India’s largest state that was larger than most nations.

I am sure this audience appreciates the significance of that great achievement, and yet it should be highlighted. Women in the world’s oldest modern democracy, the United States, had to wait for more than a century after its independence to win the right to vote. Their sisters in the United Kingdom also waited nearly as long. Even after that, many economically advanced nations of Europe refrained from granting voting rights to women. In India, however, there was never a time when men could vote but women could not.

This, to my mind, shows two things. Firstly, the framers of the Constitution had deep faith in democracy and in the wisdom of the masses. They considered every citizen as a citizen, and not as a woman or a member of a caste or tribe, and held that each of them must have an equal say in shaping our common destiny. Secondly, from ancient times, this land has seen woman and man as equal – indeed, as incomplete without each other. I know of no other civilization that perceives God as ‘ardh-nar-narishwar’, half male and half female.

Inspired by our ideals and values, we have gone further during these seven decades and have provided for fifty percent reservation for women in local bodies. Calling it ‘women’s empowerment’ is a misnomer, I think, because women are powerful anyway. Don’t we say they are a manifestation of ‘Shakti’? If facilitating their better participation in political processes is empowerment in any sense, it is empowerment of the whole society, because you all add quality to governance, you help bring focus on issues that matter.

Women are shattering the glass ceiling in one domain after another. The latest is their enhanced role in the armed forces. Their numbers are rising in the traditional male bastions of Science, Technology, Engineering, Mathematics, and Management, collectively known as ‘STEMM’. There must have been more women than men among the Corona Warriors who guarded the nation during those months of the crisis. Kerala has always contributed more than its fair share when it comes to healthcare personnel, and women of this state have set an example of selfless care even at a great personal risk during this period of crisis.

Such achievements should have been natural for women who constitute about half of the population. That, unfortunately, has not been the case. We have to admit that they have suffered from deep-rooted social prejudices. Their proportion in the workforce is nowhere near their potential. In politics too, there should be far more of you contesting and also winning elections. This sad state of affairs is, of course, a worldwide phenomenon. India has had at least one woman prime minister, and there has been one woman too among my illustrious predecessors in Rashtrapati Bhavan, when several nations are yet to have their first female head of state or government.

Putting the matter in the global context helps us realise that the challenge before us is to change the mindset – a task that is never easy. It takes immense patience and time. We can certainly take solace in the fact that the freedom movement laid a solid foundation for gender equality in India, that we had a great beginning and that we have already come a long way.

The mindset is already changing, and gender sensitivity – including towards the third gender and other gender identities – is advancing rapidly. The government is also doing its best to impart momentum to this trend with focused initiatives like ‘Beti Bachao, Beti Padhao’.
Over the decades, the state of Kerala too has been a shining example, removing obstacles in the path of women’s progress. Thanks to a higher degree of sensitivity among the population, the state has charted new paths in helping women achieve their potential in the spheres of health, education and employment. This is the land that gave India the first woman judge in the Supreme Court, Justice M. Fathima Beevi. It is in the fitness of things that Kerala is hosting the National Women Legislators’ Conference.

This conference is being held as part of ‘Azadi ka Amrit Mahotsav’. At this historic juncture, we are not only looking back but also looking ahead. We are now looking forward to the centenary of India’s independence in the year 2047. The next 25 years promise to be the auspicious period of ‘Amrit Kal’. I am sure this conference will deliberate as much about women’s role in the freedom movement as about women’s role in nation-building over the next quarter-century.

I now pronounce the concept of ‘Power of Democracy’ inaugurated. I hope that this first national conference under ‘Power of Democracy’ will be a great success. I congratulate the Kerala Legislative Assembly and its Secretariat for organizing this conference. I also extend my congratulations to all the delegates and invitees present here. I wish you all great success in your endeavours.